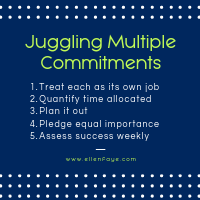 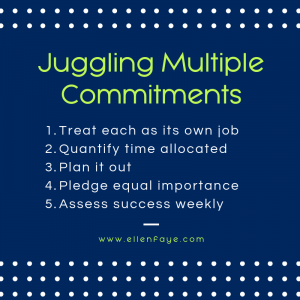 This week’s topic comes from a client’s inquiry.  She is seeking a better way to balance freelance work, her full-time job, and everything else going on in her life.

The word that comes to mind is RUTHLESS.  She will have to be ruthless in her planning, her priorities, AND her follow through.

A solid plan is paramount:

At the end of the day there are only so many hours. If you are going to say “YES” to multiple responsibilities, what do you have to say “NO” to? 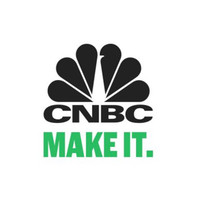 Thrilled to be quoted in the same article as Bill Gates!

As the boss of Microsoft, Bill Gates would take one week, two times a year, and escape by himself to a secret clapboard cabin somewhere in a cedar forest in the Pacific Northwest.

It was what he called his “Think Week.”

Gates would arrive by helicopter or sea plane, and spend the week reading papers written by Microsoft employees pitching new innovations or potential investments. He read as many papers as possible, sometimes doing so 18 hours a day, staying up until the wee hours of the morning, according to The Wall Street Journal.

”…I would literally take boxes out to a beach place and sit there for a week reading them day and night and scribbling on them to putting it entirely online,” Gates said in 2008 video of of Microsoft’s CEO Summit.

Work done during one Think Week eventually led to Microsoft to launching Internet Explorer in 1995. And in 2005, Gates was reading a paper called “Virtual Earth” that described building a virtual map with information on traffic and live images of final destinations.

Gates’ Think Weeks started in the 1980s; the first ones were quiet visits to his grandmother’s house. As they evolved, no visitors were allowed to the cabin during Gates’ Think Week (other than someone who dropped off two meals a day at the cabin, and on year a Wall Street Journal reporter) and Gates’ cabin was stocked with Diet Orange Crush and Diet Coke.

“When I talk about the early days, it’s hard to explain to people how much fun it was. Even with the absurd hours and arguments, we were having the time of our lives.” – Paul Allen 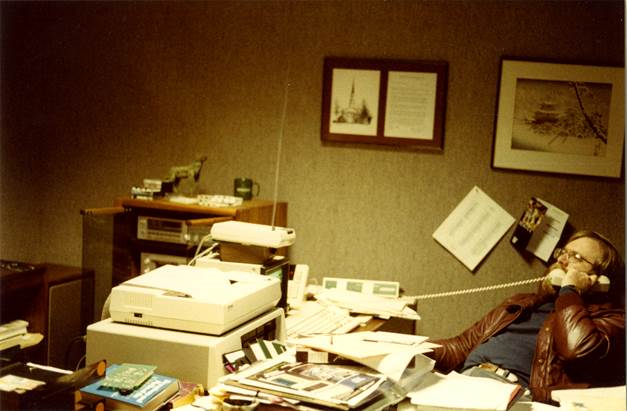 Gates’ “week in the woods” idea is smart, says Laura Stack, president and CEO of consulting firm The Productivity Pro. “I would recommend this approach,” Stack tells CNBC Make It. “People should have a ‘third place’ that isn’t work or home, where they can find focused time to think and create and clarify your strategic thinking,” Stack says. “We must create an environment that gives us the ability to focus our minds without interruption from coworkers, spouses, children, pets and technology, or we’ll never be able to concentrate on higher-order activities.”

Leadership coach Ellen Faye agrees: “While exercise, yoga, and meditation are great solutions to managing the stress of every day, there’s nothing like disconnecting for a longer period of time to create the space for important decisions and objective creative thought,” she tells CNBC Make It.

“I think of it as a one week long shower. Because we know that in the shower we have these really great thought processes, but those are flashes and moments, and when you go away for a period of time alone you’re able to get more significant results,” she says.

Stack and Faye both employ the technique in their own careers.

“I check myself into my third space — a local hotel up the road — every quarter to write for 48 hours. I’ve published eight books in 14 years using this approach,” Stack says.

Faye says she spends at least four or five days alone at a yoga retreat every year “for deeper creative thought.”

But your “third place” doesn’t have to be far away or fancy. it could be “Starbucks, the library, or the gazebo in your garden. I recommend at least eight hours, but it’s best to take several days to ‘clear the decks,’” Stack says.

As for Gates, his Think Week eventually expanded from just him reading about ideas and providing feedback, to later Microsoft’s top 50 engineering “thinkers” throughout the company doing so.

In the 2008 summit video, Gates said, “We have institutionalized it as kind of a grassroots process and this is a way that somebody who is even just a year or two into the company and has ideas that may or may not relate to the group they are in can write something up.” 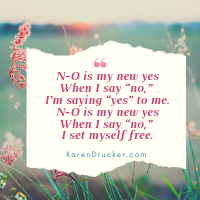 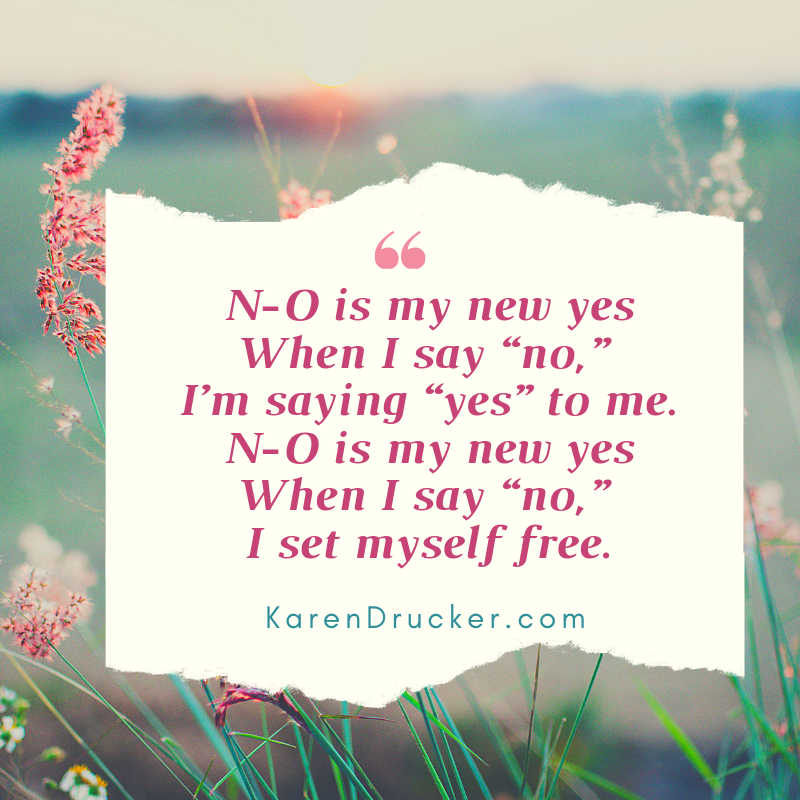 I love the word essence. It’s deep and alluring. It goes places that other words don’t go. It’s germane to many of the choices we make.

Last week’s core values exercise tells you about who you are and what you want in your life to be your best-self and live your best-life.  Essentially, these should guide your decisions about how you are spending your time and give you insight into your true priorities.

There is that word again, essentially…

When we are in our essence, we are making the choices that are congruent with our intrinsic nature. We are not fighting ourselves.  We are not trying to shove a round peg into a square hole, or trying to fill in the corners of a square peg in a round hole.

Are you in essence?

Are you saying “yes” to the right things?

Think about that while you listen to this amazing song by singer songwriter Karen Drucker: https://www.youtube.com/watch?v=LhpZKpnrOCQ

This week’s exercise is to make a “NO” LIST.  Name 5 things you will say “no” to that are not in essence with your core values.

What did you learn?

What do you have to let go of to make room for success?

What is important to you about your success?

Are important “yeses” coming into focus?

Creating Your Very Own Success Formula Blog Course Details – This is the 4th in a multi-series of posts.  Check this post for the big picture. Future posts can be delivered to your inbox by signing up for my blog. And please share this opportunity with your friends and colleagues. 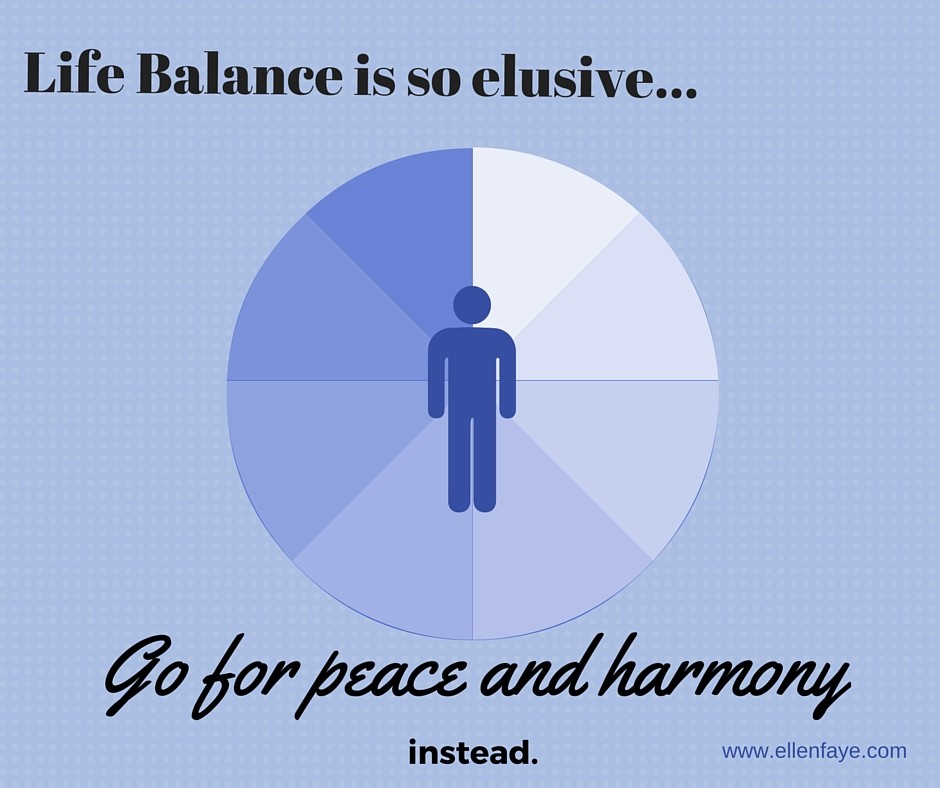 Why does LIFE BALANCE seem to be so elusive? Because it’s imaginary.  No one is ever in equal balance.  An admired colleague once described it more like a symphony where different parts are louder than others at different times, but when listening to it as a whole it is harmonic and beautiful.

What would be possible if you gave yourself permission to live in harmony and not strive for perfect balance all the time? END_OF_DOCUMENT_TOKEN_TO_BE_REPLACED 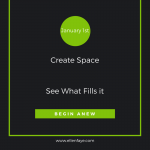 Clear your physical space. Fill it with:

Something new you really love

Clear your calendar. Fill it with: END_OF_DOCUMENT_TOKEN_TO_BE_REPLACED

I know I’ve been gone a while. I’ll be honest and tell you I didn’t write much last year because I didn’t feel I had much new to say.  I’m tired of all the content clutter out there…the same stuff over and over again.  I will not waste your time with that.  I will write this year when I have new thoughts that I think you would find valuable.  I hope that will be often.

Many of you signed up to receive my weekly tip years ago when I wrote exclusively about organizing. I have evolved and so has what I’ll share. I will be writing this year about organizing, productivity, and leadership as they relate to quality of life and making life easier.

This week I want to share with you my alternative to New Year’s resolutions and goals.  This year I want to ask you to consider writing down your intentions.  For many years people wrote about SMART Goals with the SMART meaning Specific, Measurable, Attainable, Realistic and Timely.  I’m asking you to throw that out the window and write your SMART Intentions.  Here’s a graphic I made to help you: 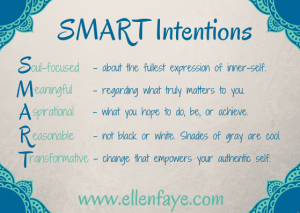 Consider what you want for this coming year.  Set your intentions today and I am sure you will indeed have a happy NEW year.

Get new blog posts by email! Enter your email address to receive updates.
You can unsubscribe at any time. 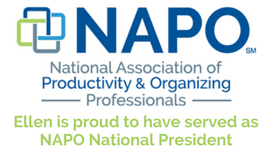 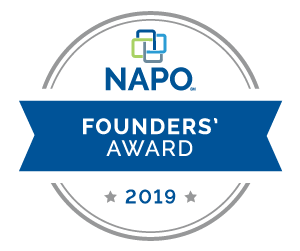